Links to my Pages

So named for a kind friend who supplied me with the feathers I needed for certain Atlantic salmon flies I was tying.  The pattern is as follows:
Sir Pete Graf 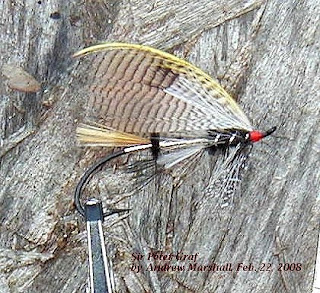 Hooded Merganser has a lovely dusty cinnamon look to it that lemon wood duck and similar ducks do not have.  The bicoloured crest also is a superb addition to the repertoire of a salmon fly tier, making a unique and good cheek or tailing and body veil, in my opinion.

In designing this fly, I was after a bright fly for a bright day, with good low-water characteristics for use as a summer run steelhead fly.  The gold tinsel body with black and white veilings, go well with the black and white of the fore-body.  The wing of course compliments the whole thing by accentuating the gold, black and white with out being over the top.  These colours should work pretty much anywhere I would think.
Posted by atlanticsalmonflyguy at 8:16 PM No comments: 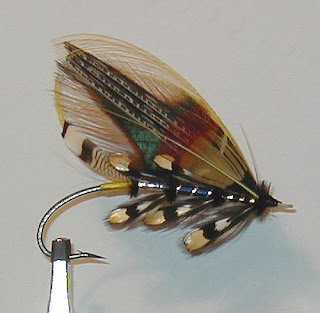 My thoughts on it after it has sat for a couple of weeks allowing me time to examine it critically... I should have used a long jungle cock over the middle of the yellow and black cheek.  Also, this photo is very over-exposed.  That hook should be black!
Posted by atlanticsalmonflyguy at 7:03 PM No comments: 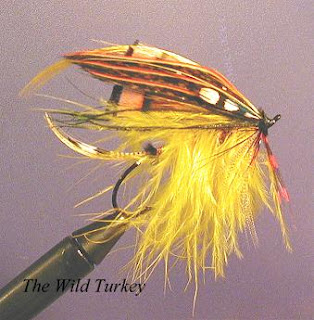 Surprised at how pretty a wild turkey feather is when dyed, and wanting to do an eagle style pattern, I created this to celebrate my successful dying of a bunch of wild turkey tails into different colours.
Posted by atlanticsalmonflyguy at 6:42 PM No comments: 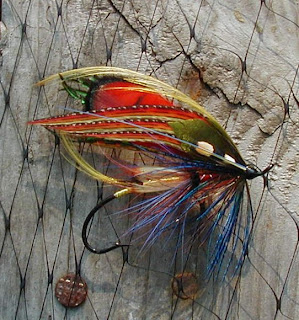 Following on the success of the Dark Side of the Moon and its exploration of light came the Red Shift, named for the Doppler shift that occurs when light is moving away from the observer.  It is this red shifted light that tells astronomers that other galaxies are moving away from each other, that the universe is still expanding, and by calculating the degree of shift, what the speed of the expansion is.  The opposite of the red shift is a Blue Shift, and that pattern has not revealed itself to me yet.  For more on red/blue shifting in light, see the wiki link provided. http://en.wikipedia.org/wiki/Redshift
Posted by atlanticsalmonflyguy at 6:30 PM No comments:

The Dark Side of the Moon 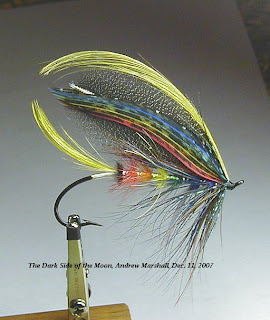 This pattern actually came to me some 25 years ago, while tripping with Pink Floyd.  It stuck around in my head, occasionally trying to get out, but not succeeding.  Eventually I forgot it.  Then one night in 2007, I was listening to the same album, but not tripping, I had given that up 20 years prior, when the pattern jumped out of my head full force and demanded to be tied.  Surprisingly, it came out very well and has been warmly recieved so far.  One of my best works I think.  The one and only original is with Monte Smith now as I promised the tying gods while actually tying it.
Posted by atlanticsalmonflyguy at 2:38 PM No comments: 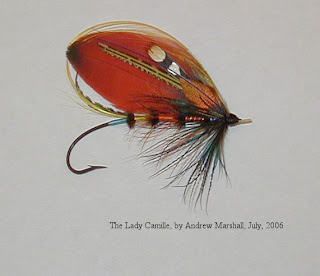 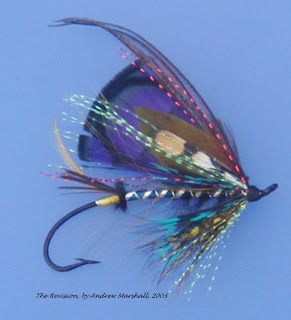 
Ever have one of those days when you get the body right, you get the wing right, but they are on two different flies, or should be?  Well, I don't know how many times I redid this fly before I got the wings and body the way I wanted them.
Posted by atlanticsalmonflyguy at 10:30 PM No comments: 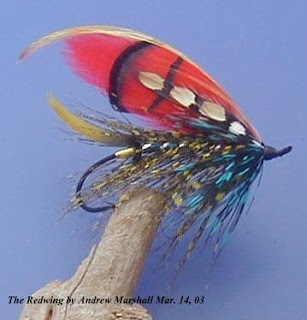 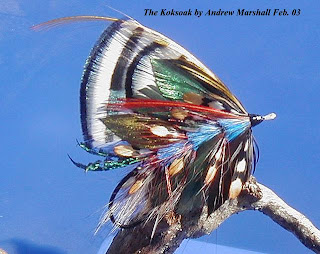 The Koksoak
Tip: fine gold thread
Tag: dark blue silk
Butt: red wool
Tail: peacock sword
Body: one turn flat gold tinsel, veiled with paired jungle cock back to back, above and below.  Remaining body section divided into thirds, each being composed of kingfisher back “chatterer” style, veiled above with paired monal neck back to back, jungle cock over, below, small tuft Canadian lynx fur, monal neck over jungle cock over that.  Butted with Lady Amherst crest wound as hackle, black ostrich behind and 1 turn dark blue floss behind that.  Each pair monal/jungle cock slightly longer, as also with the Lynx fur.  Hackle at the head is omitted and replaced with Lady Amherst as cheeks instead.
Wing: two pairs Lady Amherst tippets back to back.
Topping: Golden pheasant crest

In this fly I have tried to illustrate not just the complexity of life along the Koksoak River, but also the inter-dependence of each life form upon each other.  The River itself is illustrated by the complexly hidden blue feathers and silks that make up the body of the fly.  Woven into this are the fish, starting with the egg, as seen in the red wool of the butt, and in various stages of growth represented by the graduated sizing of the jungle cock feathers that overlay each of the monal pairings.
These monal feathers also are used to divide the body sections and in part hide it, representing the spruce and larch trees that form canopy along, and islets in the river.  These trees serve to mark the rivers course  and also they provide food for the insects that feed the salmon smolts.  When they eventually die and fall in, they become cover for returning adult salmon.  Meanwhile, standing they are shade and cover for the wild life such as the caribou and lynx of the nearby forests.  With out the river, there would be no trees, with out the trees, no fish, and less game and nothing to keep the river in its banks.  There-by  the circle of life is complete.  The bright white and black of the wings remind us of the cold, snowy harshness that is the climate a good part of the year.  Yet despite this cold and seemingly barren winter landscape, there is life.  The black stripes are the marks that man has made living here.  When balanced with nature, we can see the marks almost blend in harmony with the landscape as here in the fly they are almost subdued by the monal feather trees. The red of the Lady Amherst crest that is used at each of the body segments, and finally in a bold sweep along the side and the yellow of the golden pheasant crest topping is this common life-blood and almost palpable energy that unites all the creatures including the humans in their struggle for life in this harsh climate.
Posted by atlanticsalmonflyguy at 10:19 PM No comments: 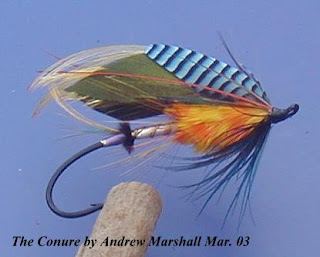 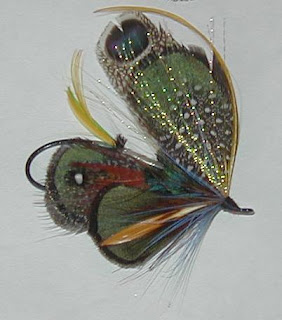 The Boreal:
One of the distinguishing features of the boreal zone is the dark forests of larch and spruce represented in this fly by the green of the various components.  This forest is occupied by various kinds of wild life, in particular various large owls, caribou, wolves, foxes, voles and mosquitoes.  In this composition, the owl is represented in the wing by the large eye-spot of the grey peacock pheasant while the voles which are the prey of so many of the arctic creatures, are seen in the spotting surrounding the eye.  The wolf and the fox are seen in the lower veiling as an eye-spot cunningly hidden and a flash of red, which is about all you ever get to see of the red fox usually.  Caribou are seen as the fine almost tweed-like speckling in the lower veiling that is similar in colour to the pelage of the woodland caribou. These three are together on this veiling as the caribou is the prey of the wolf, and the fox follows after the wolf picking up the scraps.  Both predatory species dominant over the prey, and the feathers are similarly laid over each other.  Mosquitoes are suggested by the airiness of the hackles, suggestive of the dangling legs of a flying mosquito.
Over all of this of course is the night sky suggested here with guinea in the shoulder part of the wing.  With clear skies the number of stars visible on an arctic night is staggering, and the finely speckled guinea seems an almost perfect mimic.  With the aurora borealis in play the sight is breath-taking.  Suggested in the colours of the tail, they are more played out in the cheeks and hackles which all suggest a lightness and visible colour change as can be seen watching the northern lights, especially on a frozen winters night when even the air seems to sparkle with moonlight (topping and tail) and fairly snaps with energy as suggested by the crystalflash.
The various features of the boreal zone are also seen represented again more broadly in the various parts of the fly.  Water is seen in the blue of the tag, but more so frozen in glittering ice white of the rear half of the body.  The dense forests are represented by the densely packed spruce green feathering of the front half of the body.  The wing divides into three parts, wildlife (grey peacock eye), forests (Green Lady Amherst) and the night sky (fine speckled black and white guinea).  Human impact is represented by the slash of the jungle cock saddle bisecting the green of the boreal forest, yet instead of being intrusive, it is harmonious as the relationship between the native human dwellers of the arctic has been for many thousands of years. 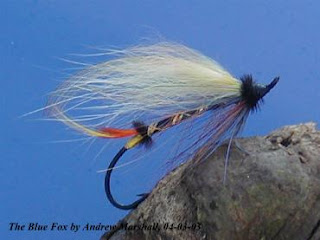 
A companion to the Arctic Fox, for dark waters.
Posted by atlanticsalmonflyguy at 10:07 PM No comments: 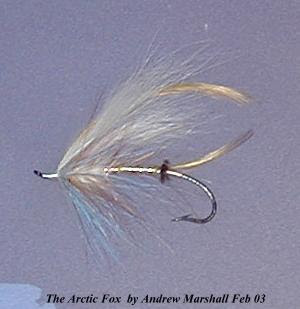 The Arctic Fox, a ubiquitous little predator of the high Arctic.  Supremely adapted to the rigours of the long Arctic winter nights as well as the long summer days of relative plenty. Both hunter and scavenger, it follows the Polar bear, gleaning scraps from the great bear's kills.  In Spring and Summer it haunts seabird rookeries, stealing eggs and chicks, eating some, caching others in preparation of the always on the horizon, winters famine.  When voles and lemmings are plentiful, it feeds heavily, and as always, hordes food in shallow scrapes.  Winter is not long away and the fox seems ever mindful of this.  In this fly design, I have tried to incorporate the elements of the foxes habitat, ice, cold, water, sunlight and the Aurora Borealis, the northern lights.  Ice gleaming and reflective of colours above seen in the white silk and various shades of reflective mylar and tinsel.   Water and sky seen in the blue of the collar, and also reflected in the tinsels of the ribbing.  Sunlight, ever bright in summer is seen in the topping and tail. The Northern Lights show in the mixed hackles, light, airy, ephemeral and full of energy and again in the tinsels of the tip and ribbing.  And of course, the fox itself, represented in the white of the wing, as it sits, partly on snow and partly on ice with it's sometimes companion, the beautifully pink Ross's gull, another equally adept Arctic denizen.
Posted by atlanticsalmonflyguy at 10:03 PM No comments: 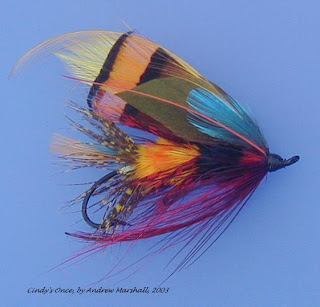 This is one of those flies where I went sort of berserk with the feathers.   I don't know what I was thinking but as is implied in the name, I only want to tie this one once.
Posted by atlanticsalmonflyguy at 9:48 PM No comments: 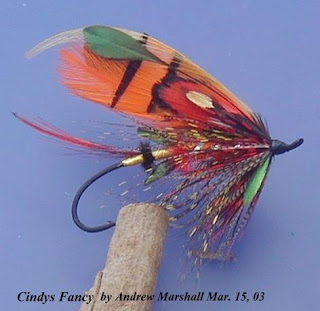 In retrospect, a bit over the top I think.
Posted by atlanticsalmonflyguy at 9:43 PM No comments: 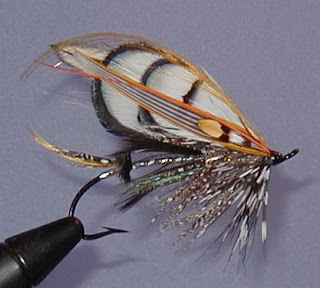 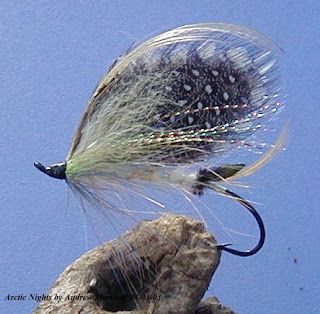 My daughter, knowing little about fly tying, but seeing what I do with fur and feathers, handed me a sketch one day and said, “Daddy, tie this.”  She was about 9 at the time as I recall.  She has an eye for a good fish getter I think!

Posted by atlanticsalmonflyguy at 7:44 PM No comments: 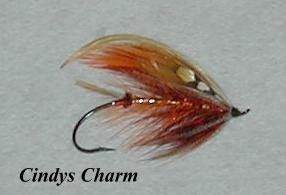 My ex has the loveliest red hair.  I think it is one of her best physical features.  This fly celebrates her and that hair.
Posted by atlanticsalmonflyguy at 7:39 PM No comments: